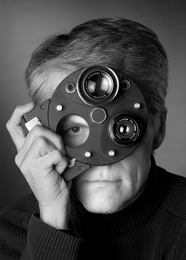 I am honored that the Ottawa Citizen has chosen to feature me in their story on Yousuf Karsh of Ottawa.
We met many times and I told him of the influence he had on my career. My one regret is never having had him take my own portrait or never having taken his, thought I did have the pleasure of taking a portrait of his brother Malak Karsh. As well, I wisely purchased an original print by Yousuf that he signed for me. The image is, in my opinion his finest work, a portrait of Pablo Casals.
My Karsh stories are many and I will save them for my own eventual book, but suffice to say I
was honored when he referred a number of clients to me upon closing his studio and equally honored when a number of corporate clients considered me as his replacement. Karsh was an artist, a businessman and one of the most refined gentlemen I have ever met…he truly possessed an old world charm that is rarely seen today. Without Karsh, I doubt my career would have developed technically and artistically as it did.

Click on this link to the Citizen page and if you click on my self portrait you can hear me speak on Karsh.

« Merry Christmas to all… Yousuf Karsh and I, Ottawa Citizen. »